A Team of Champions Among Us! 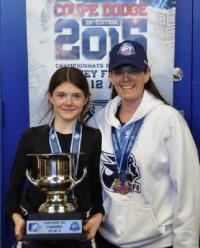 The Extrêmes de l’Outaouais hockey team won the Quebec provincial championship and the prestigious Dodge Cup. The Extrêmes are members of the Peewee B Division and their assistant coach is none other than our colleague Sean Jacques from IE Strategy and Policy Directorate. The team’s manager is Annie Brodeur, our colleague from the IE Comptrollership Directorate. They both have daughters on the team: Emma, Sean’s daughter, and Jasmine, Annie’s daughter. The two girls play defence, and do they play!!! Thanks to them, the team had only one goal scored against them in 5 games, with a combined score of 19 to 1. Quite the accomplishment! Way to go girls! Their accomplishments got the attention of La Presse, which published an article about them.

Sean was very happy when he returned to work after the tournament. “I am extremely proud of my daughter Emma and the entire team. They worked very hard, were determined and gave an amazing performance,” he told us. For her part, Annie could not have hoped for more. “They dominated the play from the beginning to the end of the tournament; they wanted to win gold, and gold they won. Our team of coaches did a remarkable job and were a great asset. I am proud of our girls, the Cup was well deserved. Go Extrêmes go!” said Annie.

The tournament was held in Rimouski April 9-12. To learn more about the team and the organization, or if you have a daughter who wishes to become a member, contact the Outaouais Girls Hockey Organization.