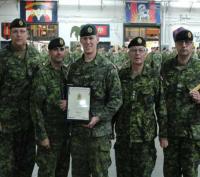 During the recent visit of our Colonel Commandant and Branch CWO to CFB Valcartier, Captain John Natynczyk was presented with a CMEA Commendation for his superior performance as the first President of the CMEA Quebec area Chapter. The Commendation reads, "Soon after his posting to 5e Régiment de Génie de Combat in July 2014, Capt Natynczyk took on the challenge of creating the future CMEA chapter for the area. Starting from scratch, he rallied the members of the regiment to maximize recruitment for the Association. Of particular note, he developed a constitution that was inclusive of all military engineers in the entire Quebec City region. The new CMEA Chapter, le Chapitre de Québec was the result.