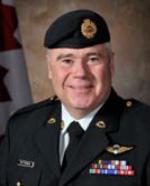 CWO Patterson enrolled in the CF in 1979. Upon completion of his recruit and TQ 3 training, he was posted to 2 Combat Engineer Regiment (2 CER) in Petawawa.

CWO Patterson then completed his jump course and served the majority of his time in 2 CER with 2 Troop (Para). At this time he completed a tour to the Golan Heights and various career and specialty courses. He filled various positions within the Regiment from Section Member to Section Commander.

In 1989, CWO Patterson was posted to Canadian Forces School of Military Engineering (CFSME) in Chilliwack. While at the school, he was a course NCO for QL3 courses for a year and he spent two years as a bridging instructor.

In 1992, CWO Patterson returned to Petawawa as a Warrant Officer. Between 1992 and 2000 he served with 2 CER and the Canadian Airborne Regiment. During this time, he was deployed to Somalia as a Troop WO on Op DELIVERANCE, as a Sqn Ops WO in Bosnia on Op CAVALIER, and Bosnia again on Op PALLADIUM as the Squadron Sergeant Major of 23 Field Squadron.

In 2000, CWO Patterson was posted to CFSME Gagetown and worked in the School Headquarters as the School Operations NCO and then as SSM Field Engineer Training Squadron.

CWO Patterson returned to Petawawa in 2002 for extended French Language training and was promoted to his subsequent rank in December 2002. In the summer of 2003, he was posted to 2 CER as the RSM. In January 2005, he was made a Member of the Order of Military Merit.

Upon completion of his tour as RSM of 2 CER. he deployed to Kandahar Afghanistan as the Joint Task Force Afghanistan R-2 Sergeant Major from August 2006 to February 2007. On 18 May 2007, CWO Patterson was appointed as Brigade Sergeant Major of 2 Canadian Mechanized Brigade Group in Petawawa. ON.

In 2009 he was posted to his current position as the Force Development CWO with in the VCDS Group in NDHQ. On 25 June 2012. CWO Patterson was appointed as the Canadian Military Engineer Branch Chief Warrant Officer.