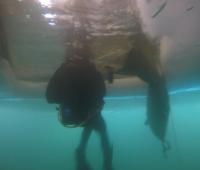 2 CER’s Dive team deployed to Garrison Valcartier for an international ice diving exercise. This exercise was led by the Army Dive Center and included dive teams from every engineer regiment in Canada, clearance divers, and international personnel. The international participants were from Holland, France, the U.K. and the U.S. 2 CER was augmented by three American divers and two Dutch divers.

The first task given to the team was the removal of an Armoured Personal Carrier (APC) stuck in the ice at Lac Ortona in the Valcartier Training Area. Part of the tracks had fallen through the ice and it was completely immovable. Due to pressing environmental concerns it had to be removed before the ice thawed. Working with 5 Service Battalion the team had to cut the APC out of the ice and have it towed to shore. After a day and a half of jackhammering and using chainsaws it was finally free from the ice’s grasp. Due to the strange positioning of the vehicle, four wreckers were needed to pull it out of the hole and onto shore. It was removed with a Tru-hitch and brought back to base.

The second task was to search for the remains of a simulated plane crash. 1 and 2 CER dive teams worked together to search the frozen quarry at Deschambault-Grodines for three bodies and a black box. The recovery had to be well documented and the evidence gathered had to be presented to the RCMP.

The standard operating procedure to build an ice diving site is to first clear the snow. This is done in a very specific way. First, a 10 metre circle directly around the site is completely cleared. Then a 45 metre circle must be cleared by one metre wide “Spokes” creating a wagon wheel pattern. This helps to bring light through the ice which serves as a reference point for the divers. Next a triangular hole is cut into the ice. A tent is set up over this hole to provide a warm area to work in.

The preferred method of ice diving is to use a surface air supplied system. During the search underwater markers were used to ensure that no area went unaccounted for. The first find for the team was a mannequin (simulating a body), which had to be photographed with a Go Pro then extracted. The extraction was done with a body bag as to not disturb the body, both to preserve evidence and out of respect to the victim and their family. The remainder of the first day yielded no further finds. On the second day of searching an additional body was found co-located with the black box. 1 CER’s dive team found the final body and the evidence was presented to the RCMP officers.

The exercise finished with presentations to all international teams with their leaders being officially given the Pukka Sapper honour. This exercise provided a great opportunity to share our knowledge and to learn from the Americans and Dutch.