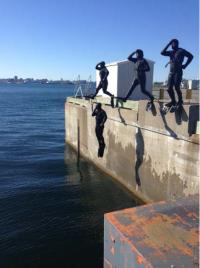 Serial 0029 of the Combat Diver course ran from 31 August to 19 November 2015. If the first day was an indication of things to come, we quickly found out that this was going to be a challenging course. As per the previous courses, we rapidly learned how to dive but more importantly, how to do it well. The instructors were quick to remind us if any errors were made along the way, which ultimately benefitted us both in mind and spirit. We swiftly improved on our mistakes and ultimately learned to rely on each other, whether paired-up in teams or as a collective group. We learned to respect what the Combat Diver badge really means and to respect each other. First and foremost, the first few weeks prepared us to complete tasks in the most adverse conditions. We learned to adapt, and become more proficient at our trade.

The overall purpose of the Combat Diver course was not to maximise bottom-time, but to develop our skills as divers. Time on training was seldom wasted and it all served to make us better at our trade. From a more detailed course on the O2 system, to the patching and maintenance of our boats, we were taught the skills intimately in an environment that ensured we would retain the knowledge and have an appreciation for its importance and relevance.

The first two weeks of the course, spent in Gagetown, was a continuation of the prelim and ensured our fitness level was kept to a high standard, a requirement when exposed to long periods of diving. During this time, we were also introduced to our equipment and learned to breathe under water for the first time. For most of us this was a completely foreign experience. The time at CFSME culminated with our in-water test, where we proved ourselves capable of the basics required for the “blue phase” (generic diving phase) and diving in the Halifax Harbour.

The blue phase was high intensity and fast paced. Each day we dove two or three times, learning the basics of underwater engineering and steadily accumulating time and experience working under water. The progress made by the students over this phase was extraordinary. Buoyancy control, breathing efficiency and comfort underwater increased with each dive, as did our confidence in each other. We all became proficient divers during this time and learned how to work well in teams. This proved to be a necessary prerequisite as we moved through to the green phase (Combat phase), where the tasks became more complicated and visibility dropped to zero.

The green phase, back in Gagetown, was an intense experience. Split between engineering tasks and tactical night missions, it taught us both the diversity of the combat diver and the level of performance expected of them. We learned valuable lessons on utilizing the “right tool for the job”. When the right tools were out of service, we were forced to improvise, and more was learned from the consistent and grandiose failures of these improvisations than from our successes. The training environment generally creates scenarios in which we have everything we need for the task, but, unfortunately, Murphy often has a different idea. As Engineers in the CAF, we are taught to improvise at all times, which was a skillset that came in handy during the course as we weren’t always presented with the proper tool for the job. The failure of our training aids at times gave us a better appreciation of a more realistic situation. We were pushed to think in non-traditional ways and it gave us a more diverse experience.

The flip side of our daytime engineering tasks was the tactical night missions. These missions included conducting amphibious reconnaissance and breaching in the presence of an unknown enemy force. Hard training proved its value here, as we carried out missions in near-freezing conditions on little sleep. We were exposed to new technology and techniques that taught us to be better soldiers, leaders and divers.

Combat Dive course 0029 was an experience we will all carry with us through our careers. We learned more than any of us had ever expected and it indoctrinated us into a community of high-performing professionals. As we return to our units, we become part of our Dive Teams, where our experience will continue to grow. We become part of a select group and we will thrive to represent the Combat Diver badge with honour.