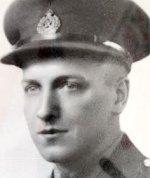 Kenneth James Southern was born in Port Arthur, ON, grew up in Ottawa and graduated from Queen’s University in 1934 with a Bachelor of Science degree in mechanical engineering. He was serving as a militia RCE lieutenant in Toronto when he transferred to the active force on 3 September 1939.

He was immediately promoted to captain and appointed as the second-in-command of the 8th Workshop and Park Company in Toronto. In January 1940, he was posted to the 2nd Field Company and arrived in the UK in May. Capt Southern was promoted to major in January 1941 and posted to the 13th Field Company in October. In December 1942, he returned to Canada for a staff course at RMC. Major Southern was back in the UK in February 1943, and was appointed CO of the 3rd Field Company in March and led the company through their commando training in Kilmarnock, Scotland in preparation for the invasion of Sicily. Closer to departure from England, it is reported he personally oversaw the preparation of the company’s equipment including waterproofing vehicles until they departed in the convoy in June.  Major Southern led his company through the entire Sicilian Campaign, where he was awarded a DSO for an action he led building the first Bailey Bridge of the war under fire at Leonforte. He continued through Italy until November 1943 at which time he was appointed Brigade Major (Brigade G3 in today's parlance), of the 3rd Canadian Infantry Brigade.  He was described as a gallant leader. He was promoted to lieutenant colonel in April 1944 after having succeeded Lt-Col Geoffrey Walsh as CRE 1st Div in December 1943 just after the Ortona Battle.

Lieutenant Colonel Southern was killed in action on 27 May 1944, during the crossing of the Melfa River. Lieutenant Colonel Kenneth James Southern, DSO, was initially buried in the ‘track junction cemetery'. His remains were later moved to the Cassino War Cemetery.  He was 32 years old.

There is a staircase in Hillcrest High School in Ottawa with eighty-four large portraits of students who died in the Second World War lining both sides of the 55 stairs leading up to the school's auditorium. Most of the portraits have the rank and year of death of the student. Some portraits explain how the soldier died, but many were MIA and presumed dead. Each year, teachers from the grade 10 Canadian History course take their students to the stairway around November 11th to complete a project that deals directly with the pictures on the Stairway of Honour. One of those portraits is of Lt-Col Kenneth James Southern, DSO.

"While the Edmontons were battling through the night in Leonforte, outside the town the Engineers had been working vigorously but methodically to bridge the 50-foot gap. They were under constant mortar and machinegun fire which they later nonchalantly described as being “slightly high”. While the job was still in progress, their company commander, Major K. J. Southern, moved up the road with a few of the Edmontons to the outskirts of Leonforte, where they were confronted by a machine-gun covering the only approach to the town, and close beside it two enemy tanks and a small force of infantry. Here was a potential threat to the sappers toiling in the ravine below that might well have halted their efforts and spelled disaster for the isolated Edmontons awaiting reinforcement in the town. Catching the Germans by surprise, Major Southern’s little party discharged their small arms and made such a display of force that the more formidable enemy group was deterred from advancing. shortly afterwards the commander of the 90th Canadian Anti-Tank Battery, Major G. A. Welsh, who had come forward with the engineer party, recrossed the ravine under heavy fire to bring two of his six-pounders into action. The machine-gun post and one of the tanks were destroyed, and Welsh kept up the good work by once more approaching the town and with the help of two engineers taking twenty German prisoners.”

On the night of 21/22 July 1943, this officer organized and led a portion of his company in a bridging operation south of Leonforte, Sicily. Although under fire during this whole period, by his personal example he gave his men confidence which enabled the task to be completed in the face of enemy tanks, led them forward and secured a height of ground above the bridge. This officer's conduct and initiative are beyond highest praise.